Haleakala: Intro to the Volcano 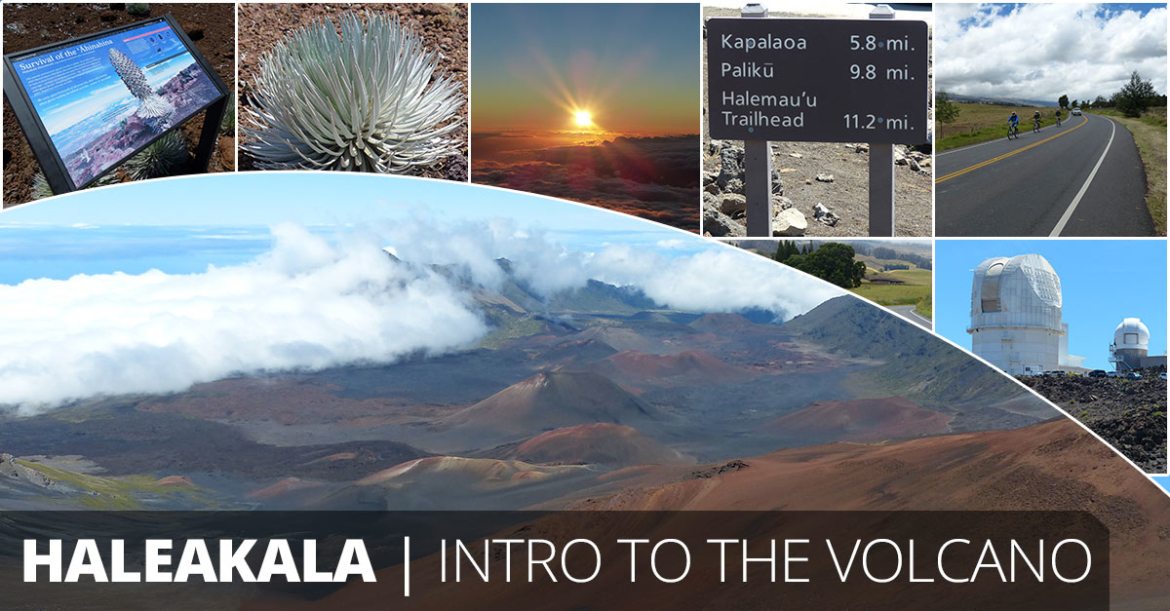 One of the legends told on the Valley Isle says that the demi-god Maui was talking with his mother one day, when she complained that the sun (la) was moving entirely too fast across the sky.  There wasn’t enough time for the women to dry their kapa cloth, she said.  And there wasn’t enough time for the men to fish.  Maui decided he would take care of this.  That night, he hid in a crack in the mountain where he knew the sun lived — Haleakala, the “House of the Sun!”

Haleakala, Maui’s dormant shield volcano, rises over 10,000 feet above the ocean’s surface, and covers three-quarters of the land mass of the island.

Native Hawaiians consider Haleakala to be sacred ground.  When you stand there yourself – immersed in the crisp air, the rising mists, and the crumbling stones that blanket the steep slopes – you’ll likely understand.  It is the highest point on Maui, and the closest we mortals can get to the heavens.

The volcanic landscape of Haleakala is completely unique, and often evokes comparisons to the terrain of Mars or the moon.  The air up there above the clouds may be more fresh and clean than any breath you’ve taken yet.  Personally, I left the summit feeling full of energy, full of thanks, and full of hope. 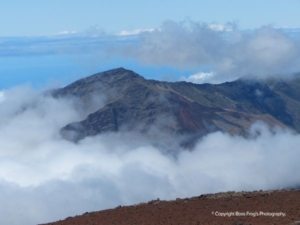 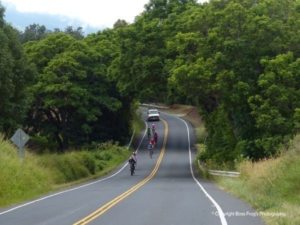 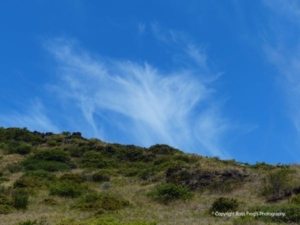 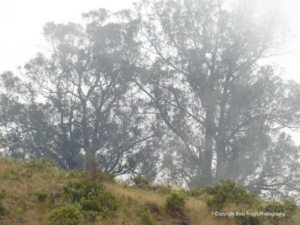 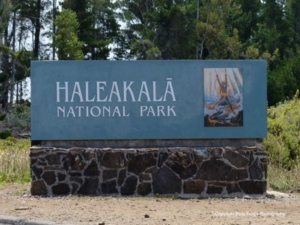 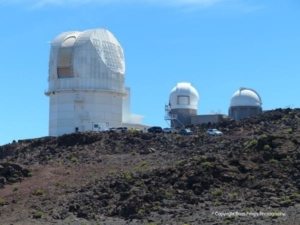 Two volcanoes make up the island of Maui: Haleakala to the east, and the West Maui Volcano to the west.  The crater of Haleakala was not created by an eruption of the volcano.  Haleakala Crater is actually the meeting place of two partially-eroded valleys – Ko’olau and Kaupo.  The resulting bowl – which is large enough to hold Manhattan – is covered with cinder cones and crumbling, long-cooled lava flows.  The estimated time of Haleakala’s last eruption (ETE?) is 1750.  (In Europe and North America, that year sparked the beginning of the Industrial Revolution.)  West Maui Volcano’s most recent activity, on the other hand, was way back in the Pleistocene Epoch – 2.6 million to 11,700 years ago, which was the same time that mammoths roamed the Earth.

Nowadays, Haleakala National Park can be experienced in several different ways.  Some enjoy waking long before dawn to be scooped up by a tour bus and ferried up the mountain for sunrise.  (I like this plan; you can sleep in the van!)  Whether you decide to doze, you will likely be glad that you’re not driving that particular road in the dark.  Haleakala Highway is full of narrow switchbacks near the peak, and your experienced guide will know exactly what he’s doing. 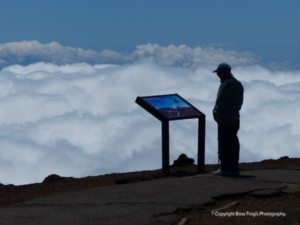 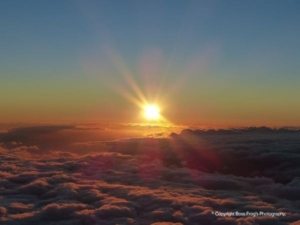 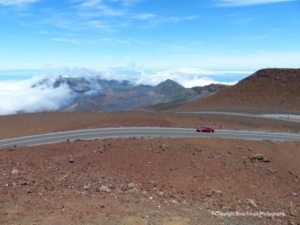 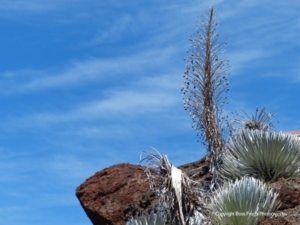 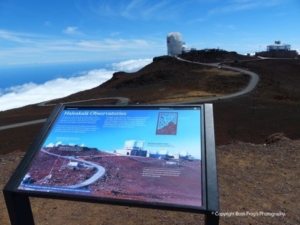 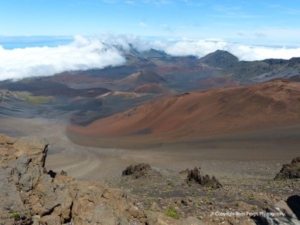 Haleakala is a large part of the ecosystem of Maui, of course, and one of its plants – the Haleakala silversword, grows nowhere else in the world!  Also thriving on the slopes are endangered Hawaiian geese called nene.  For the protection of these two species, and also out of respect for your host culture’s reverence for the area, please stay on the trails and do not stack rocks.  Thank you for caring for this place that entertains you and sustains those who live here.  Mahalo nui!

When the sun begins to rise, you’ll have the chance to see the first day’s rays paint the island and the ocean around it in incomparable colors.  (I say “have the chance” because it can be cloudy at the summit during sunrise.)  Whimsical weather, however, rarely stops someone once they’ve committed to this extra-special beginning to their day.  In fact, a Haleakala reservation system was recently implemented for sunrise only, limiting the number of guests.  The intent is to keep everyone safe, to protect the summit from overuse, and to give everyone present a great view. 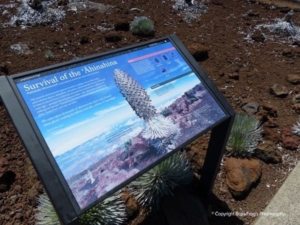 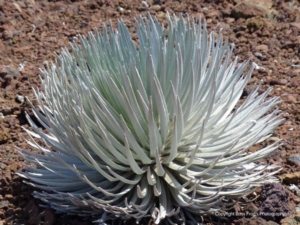 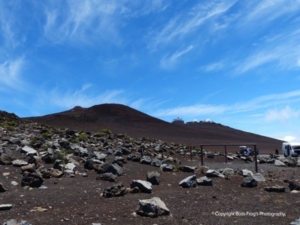 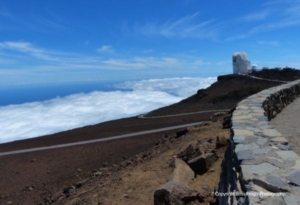 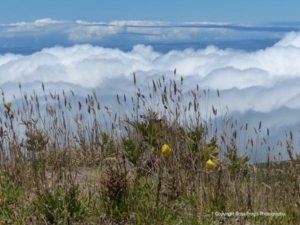 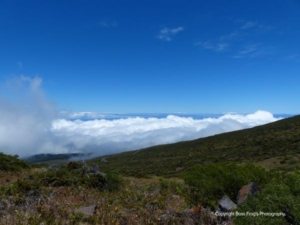 If you like, your sunrise experience can be bundled with a mountain bike tour down the hill.  All equipment is provided, including helmets.  As a cyclist, you’ll be sharing the beautiful road with vehicular traffic.  And if you’re not interested in waking up early, there are afternoon bike tours available, too!

Unless Maui is in the middle of some severe weather, Haleakala is open to visitors year round, 24 hours a day.  You can hike, camp, and even spend time after sunset just to stargaze!  As a matter of fact, because the air is so clear (and the light pollution so dim) at that elevation, three observatories have been built on the summit!

As for me, I meandered my way up the volcano and ended up arriving at the summit around noon.  I can’t get enough of the majesty of nature, so I felt inclined to stop several times along the way to admire the views, the trees, the flowers, and the quiet.  Did you know you can see the neighbor island of Kaho’olawe, and also Molokini Crater from Haleakala?  It’s true!  Another FYI: it is VERY cold going up the mountain.  You may be comfortable in a bathing suit at sea level, but you’ll need long pants and a coat for these higher altitudes.  I live in the island’s lower elevations, so I was quite thrilled by the chilly air.

As the seasons change on the Hawaiian Islands, each one experiences marked shifts in ocean swell direction, storm frequency and strength, and water temperature, but there is no clear division in the air temperature at sea level. The closest most of us get to wintery conditions are our twice monthly visits to the produce and dairy sections of Costco. (Forty-five seconds, tops. Brrrr!)

When you are ready to experience Haleakala, remember that there are many ways to do so, and be sure to make reservations if you’ll be going for sunrise.  Pack warm clothes, sunscreen, and water; walk slowly at high elevations, respect the land, and have a wonderful time.  Oh, and for my fellow drone pilots?  No flying is allowed in this or any other national park.  Enjoy! 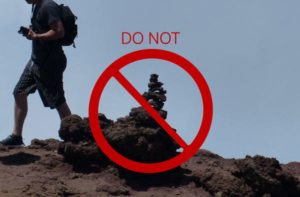 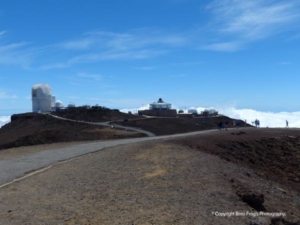 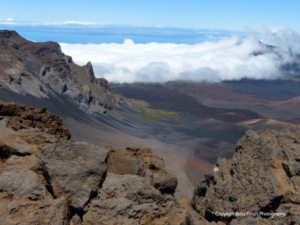 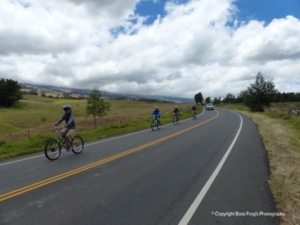 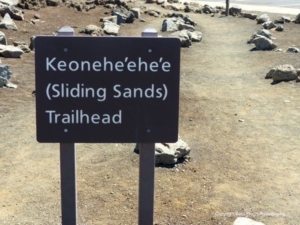 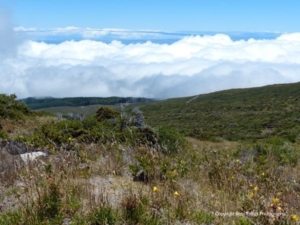 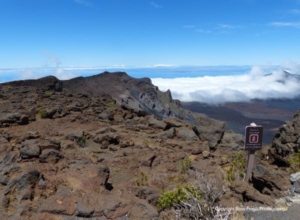 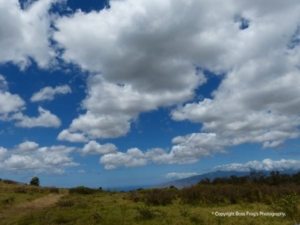 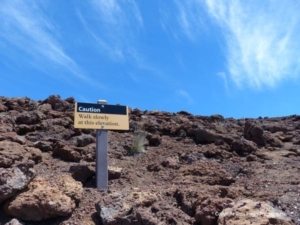